Use of donations and legacies: prizes and grants

The bequests and donations made to the Academy allow it the endowment of prizes and scholarships renewed every year or every two years., through the management of movable or immovable heritage, to which they give rise. 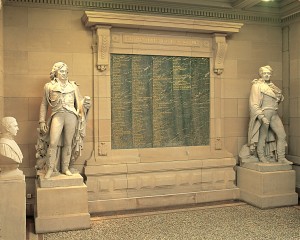 The National Academy of Medicine awards around 40 prizes each year.

Their amount is variable but several prizes exceed a value of € 20,000.

While some prizes are oriented according to the wishes of legatees and donors to specific medical fields, others are intended to reward or encourage research in the medical, pharmaceutical or veterinary sciences without the subject being defined.

The awards often bear the names of the benefactors who bequeathed the heritage necessary for their creation to the Academy.

The awarding of a prize confers the title of Laureate of the National Academy of Medicine.

The National Academy of Medicine co-finances (in addition to a donation) scholarships to two Chinese medical students from Rui Jin University in Shanghai and Wuhan University. The candidates are proposed by the two academicians currently respectively responsible for the French-speaking streams of these two universities. A jury composed of Academicians designates the beneficiaries.

The National Academy of Medicine provides housing grants to  medical students who are in need.
It pays annually the sum of € 20,000 (amount for the year 2020) to AFEM (Association Aide aux Familles et Entraide Médicale) which redistributes this amount, in the form of grants, during a session that takes place every month in October in the premises of the Academy of Medicine. Individual grants amounting to  € 5,400 have been awarded in recent years.
Their funding comes from rents from a building located rue de Maubeuge in Paris in the 9th district, bequeathed to the Academy to help medical students.
Given the difficulty it would have to finance them under the current conditions of its budget, the National Academy of Medicine no longer awards research grants for French students (Master II or university thesis)